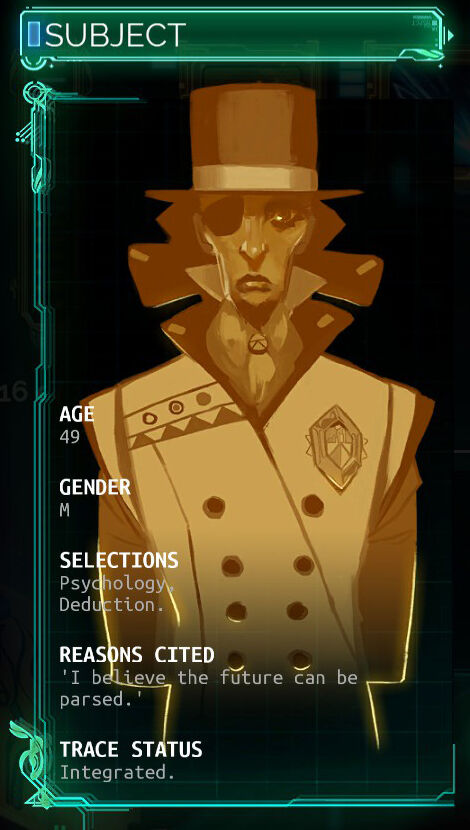 How many cases must one crack to become the most highly decorated detective in the 18th Precinct? Even this, Officer Henter Jallaford knew ahead of time, although he never acted prideful about it. Of course Officer Jallaford was no mere detective -- he was a forecaster. This was one of the rarest and least understood professions in Cloudbank, though the results spoke for themselves. Officer Jallaford possessed an almost uncanny ability to solve any mystery that blew into town. So it was that he became very interested in the reasons why Central Administration quietly decided to take down the northwestern edge of the Goldwalk district until further notice.

Officially speaking, Officer Jallaford could only do so much until the administration provided sufficient clearance, for his own safety. But, one of the side effects of Officer Jallaford's talents as a forecaster was his insatiable desire to confirm his hypotheses. So he decided to move forward with his investigation, sensing significant trouble and not wanting to sit idly by rather than do his job. What he discovered in Goldwalk shook Officer Jallaford to his core. He has never seen anything like it and his hands shook as he prepared his report on the spot. But he ceased transcription when several individuals approached him. He did not expect them either.

The Camerata knew Officer Jallaford posed a significant threat, as he was one of the only detectives stubborn or determined enough to refuse to accept the administration's non committal answers about what was going on in Goldwalk. After considering several ideas that might draw the Officer out, the Camerata realized they needed only to be patient with him. After all, a forecaster could only predict what was already planned. After Officer Jallaford vanished, the 18th Precinct fabricated a palatable explanation for the public (the Officer was approaching retirement age), and together they agreed to name a quarter of his home district in his honor.