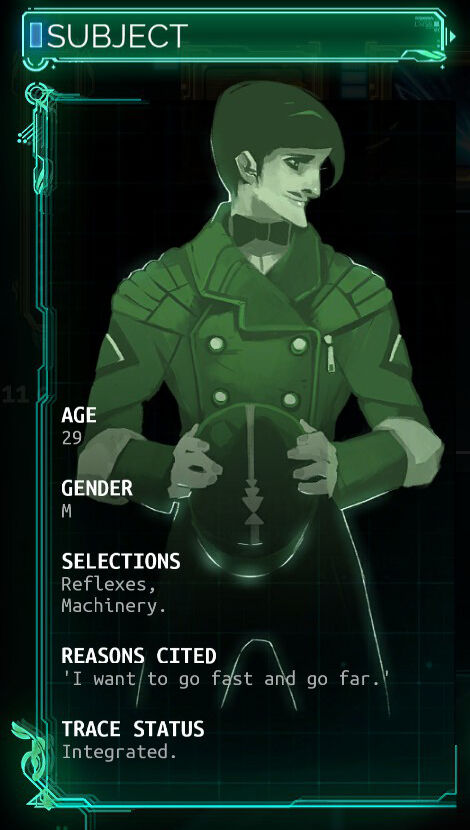 P. Moyle was a man who lived in The City of Cloudbank. He was found dead by Red, and was absorbed by Transistor, granting the Jaunt() ability.

Cloudbank's racing circuit never knew the likes of Preston Moyle, who shattered speed records with aplomb for four years straight. Credited with popularizing the sport of 1200cc racing, Mr. Moyle gained celebrity not merely for his exceptional riding ability but also because he built his motorbikes with his own hands. Ever the thrill-seeker, Mr. Moyle became known for seeking out cloudbank's remotest strips of road. Then one day Mr. Moyle was altogether gone, having left all his personal effects behind -- save for his fastest bike.

Tracking systems on his bike indicate that Mr. Moyle headed northwest across the canals late one night, averaging speeding 228% faster than the common standard. He surely was aware that the northwestern corner of Cloudbank was offline pending investigation, and this was likely the appeal. Having his own abandoned part of town to race through on his custom bike was Preston Moyle's dream. And the reality lived up to the dream, judging by the volume of Mr. Moyle's Laughter recorded by his bike. However the recording stopped abruptly.

OVC first declared Mr. Moyle's absence a full five days later, so sure were his associates that he would return like always. His close friends did not worry more than usual for three days, but for each subsequent day their worry increased an average of 84%. This quotient proceeded to spread to the numerous fans of Mr. Moyle's illustrious career, although administrators barred any appeals to search for him in an offline district.